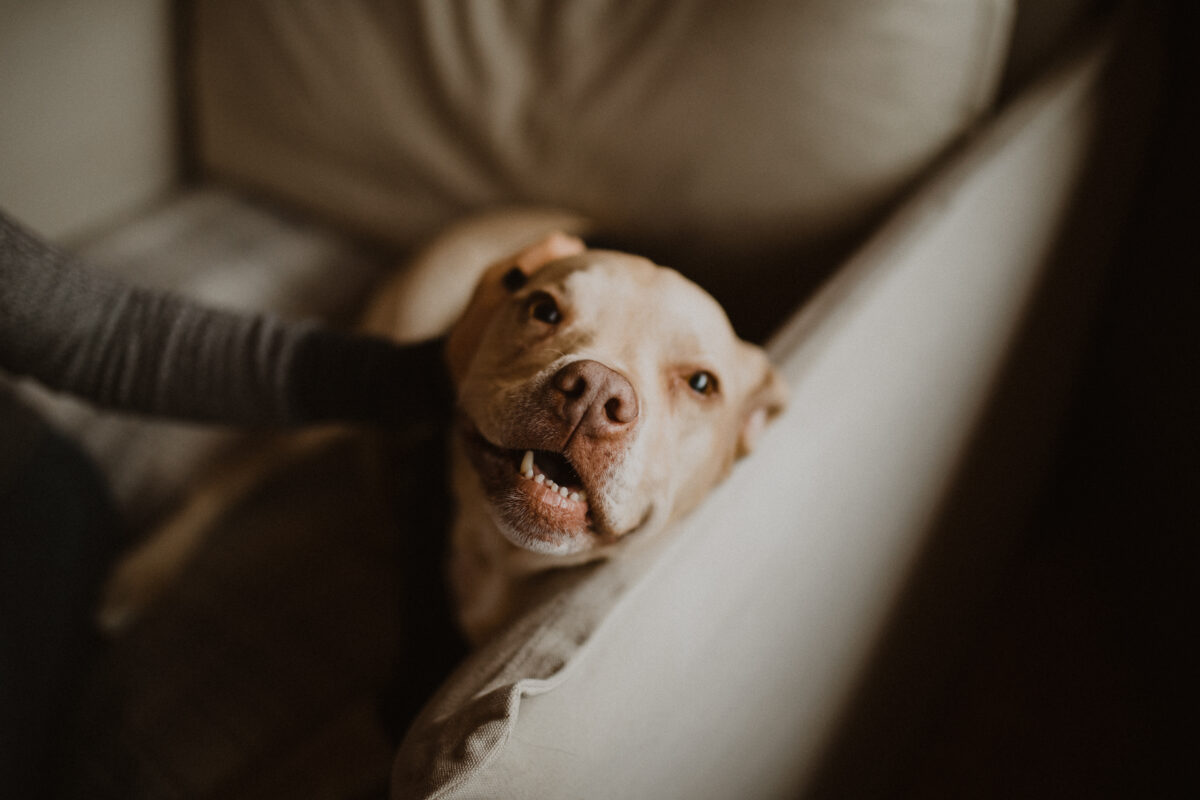 In October of 2020, Stella developed a significant limp that wasn’t getting any better with time. She was 6-years-old.

I wasn’t too concerned as it wasn’t unusual for her be a bit stiff after a challenging hike or a long session of fetch. At 3-years-old she was diagnosed with congenital dysplasia and has suffered from arthritis as a result. Stella has always done everything all-out in spite of her pain, and I assumed that she had pushed herself too hard.  Her limp favored her “bad leg” that had the most significant dysplasia, so I attributed it to arthritis and made an appointment to have it checked out.

On the morning of October 15th, 2020, I took her to the vet who took a few scans of her shoulders,  hips, and elbows to see how far the dysplasia and arthritis had progressed. Stella LOVES going to the vet. Anytime she can visit with people is a good time, no matter the circumstances, and this day was no exception. She gave plenty of smiles and tail wags as he examined her. Her scans actually looked much better than the vet had anticipated and he thought her limp may be due to a soft tissue injury caused by joint instability from the dysplasia. There was not much to do in this case beyond waiting for the injury to heal on it’s own.

We were about to head the front desk and wrap up the appointment when he stopped me and pointed to her front right leg. He asked how long that bump had been on her wrist, and I said I hadn’t even noticed anything (she has bumpy wrists…). He wanted to get a scan of the area because he didn’t like the way it looked. I had no idea what that meant or what he was looking for. As he looked at the X-ray he frowned and pointed at a black spot on Stella’s distal right ulna, directly at the wrist joint.

“What am I looking at?” I asked

“What does that mean?” my panic growing, knowing it meant cancer.

“It’s a very aggressive bone cancer with a prognosis of 2-6 months without treatment.”

I felt like the wind had been knocked out of me and I couldn’t possibly be hearing him correctly (did I mention that I was 7 months pregnant?). I immediately began to cry as he told me really the only option was amputation or limb-sparing surgery. I couldn’t get past hearing 2 months. TWO months. That was 8 weeks. That was…nothing. My due date was in 2 months. I completely broke down and tried to blame it on the hormones as he gave me the information for the closest veterinary teaching hospital (WSU, 5 hours away). He mentioned that they often were booked out for months.

I sobbed all the way home.

I immediately began calling other veterinary offices, desperate for a second opinion. I spoke to three other vets after sending them her scans. One was a family friend who compassionately explained what an osteosarcoma diagnosis meant.

There was a 5-10% chance that this disease would not kill her. With amputation and chemotherapy, there is a median survival time of 1 year after an osteosarcoma diagnosis. HALF of dogs who underwent the most extensive treatment possible would be alive in 12 months. The cancer had most likely already spread microscopically, and even with amputation and chemo, it would likely eventually metastasize in another part of the body.

Again, I felt like the wind had been knocked out of me. There wasn’t a cure. This felt like a death sentence.

He also explained that osteosarcoma is incredibly painful and without any treatment, euthanasia is typically chosen well before the cancer causes death because of an extremely diminished quality of life (he likened the feeling to that reverberating pain that occurs after  being kicked in the shin…but unrelenting).

The reality was that if I wanted to keep her alive and address the immense amount of pain she was experiencing, her leg had to come off. It was obvious  that she was hurting; in a matter of days, she had stopped using her right leg almost entirely.

He also let me know that unlike what I thought I knew, dogs typically tolerate chemotherapy very well, experiencing very few side effects. Chemo isn’t given to dogs in a curative amount, as the goal is simply to slow the metastasis and increase life expectancy while maintaining quality of life.

Remember those two other vets I called and sent Stella’s scans? Well one of them called me back after having had a chance to look at the area of concern and told me that he wasn’t convinced it was cancer. He said there were some things about the image that looked like osteosarcoma, and some that didn’t. He recommended getting a biopsy and offered to set up an appointment.

The problem was that he was two and half hours away and she’d have to have an initial appointment and examination before the biopsy. And it was winter in Montana and the roads were terrible.

We had recently moved to a rural part of Montana where vets were limited (and certainly vets who had experience with oncology) and I had tried three clinics I didn’t love in the area already. The vet who told me that Stella had osteosarcoma? That was our first visit ever. There was no relationship or trust established, so I didn’t feel as  though I could just take his word for it and amputate her leg.

I made the appointment with the vet who wanted to do the biopsy and in the meantime, I got a call from the final clinic who received her scans. They wanted me to come in for additional scans to be sure it was cancer. They were only an hour away, so I decided to go for it.

The vet tech came to my car and took Stella into the clinic. This was in the middle of Covid protocol so not only could I not go in with her, I couldn’t even meet the vet face-to-face. I was just going on gut instinct. I sat in the car and waited for what felt like years before my phone rang. I was shaking as I answered it.

“We just love this girl! She has been all smiles and getting lots of attention and cookies.” the vet said. I thought surely she wouldn’t sound so chipper if it were bad news.

“When were these first scans taken?” she asked. “A few months ago?”

I felt my heart sink as I responded, “Those were taken three days ago.”

She said she was quite concerned about the amount of change she saw on the scans and recommended that we amputate as soon as possible.  I felt panicked at the idea that the cancer was spreading so quickly and made the amputation appointment. The vet who would be performing the procedure was yet another vet at this practice, and someone I had never met.

On the morning of her appointment, we left the house in the dark at 6am. I felt sick the entire way as I knew that Stella had no idea I would be dropping her off to have her leg removed. We pulled into the office parking lot and called to let the techs know that we were here. A few minutes later, we received a call from the office. It was the vet who would be performing her surgery. He let me know that he had taken a look at her scans and he didn’t feel it was definitively cancer.

He said based on what he saw, it could be  a bacterial or fungal infection, which would not necessarily mean amputation and would certainly carry a much better prognosis. I felt a bit of hope creep back; maybe it wasn’t cancer and everything was going to be ok. He recommended Stella undergo a bone biopsy instead of amputation that day.

He said there were a few risks involved with the procedure. He had to get a good sample that would contain the cells in the questions, which could be difficult depending upon how degraded the bone was. This could also lead to fracture at the site of the biopsy, which would cause significant pain. There was also the risk of putting her under and her recovery would be painful.

That being said, I felt that I had to know for sure it was cancer before we amputated as she was so young, she has arthritis, and it was hard to say what kind of a strain amputation would put on her joints. In short, the vet said that we didn’t want to amputate the noncancerous limb of a dog who may have years and years of life left and would be left with potential mobility issues that would impact her quality of life.

I couldn’t shake the idea that every second we waited, the cancer was spreading, however. Part of me just wanted to take the leg off because we would have to wait 1-2 weeks for the results of the biopsy and that seemed like an eternity. The vet assured me that this time should not make the difference in her outcome, however. I told him to go ahead with the biopsy.

The procedure went well and he also took a sample of axial lymph nodes to check for metastatic indicators there. I took Stella home to recover and felt a sense of relief. That was all I could do at the moment. We just had to wait. A week and a half went by and I felt myself having hope that maybe this WAS just a bone infection, maybe everything would be ok.