On November 5th, 2020, we woke up early in the morning and drove an hour in the dark to drop off Stella for her amputation.

I felt so many mixed emotions: relief that we were finally taking action against what we now knew for certain was cancer; guilt that I was sending her to have her leg removed and she had no idea; fear that something would go wrong during the procedure or that she wouldn’t do well afterward. Stella’s arthritis primarily affected the elbows in her forelimbs. Dogs’ forelimbs carry around 65% of their weight, so by removing a front leg, we were putting 65% of Stella’s weight on one arthritic limb. What if mobility issues got her before the cancer did?

The what ifs were endless.

This experience taught me that sometimes, there are no definitive answers. No one was there to tell me that we were doing the right thing. No one could tell me for sure what the outcome would be. Stella couldn’t advocate for herself, so the only thing I could do was make a decision based on all of the information I had and hope that it was the right one for her.

The good news is that the leg that was coming off was also the leg most affected by her arthritis. That leg has consistently given her the most trouble, so I felt relieved that if one had to go, it was that one.

Again I handed over my sweet girl to a masked vet tech in the office parking lot. I still had never been inside the building nor met any of the vets who had participated in Stella’s care. They told us that they would call us when she was ready to be picked up.

We drove away and I think I cried on and off for hours (I am sure that the pregnancy hormones were not helping to reel in the wide range of emotions I cycled through during that day..).

We got the call in the early evening that the procedure was completed, and that Stella had done very well. They were sending her leg and more lymph nodes for testing to see if they could get a better idea of how far the cancer had advanced and what her prognosis might be. We drove the hour back to the vet as the sun went down.

When they brought Stella out to the car, she was walking on her own, but obviously very loopy from the sedation. I saw her standing on three legs, looking confused and very unlike herself, and immediately I began to cry. The reality of the situation hit me- she no longer had four legs and would never have four legs again. And I had made the call.

We brought her home and she went right to sleep on her bed. She cried out a bit that first night, clearly in pain. She got herself up around 2am and hopped to the door, asking to go outside.

I took this as a good sign- she was already able to navigate on three legs mere hours after major surgery. I do think the fact that she had been unable to put much weight on her bad leg for a few weeks had prepared her for life without it completely.

Stella’s incision was very difficult for me to see. It looked painful and it was hard to believe it would ever heal. For the first few weeks, Stella cycled through my workout t-shirts, which helped keep her from licking her wound and provided a bit of a barrier from potential bumps and snags.

For the first two weeks, I wondered if I had made a mistake.

Stella’s personality can only be described as effervescent. She loves people and cannot help but smile her signature ‘Stellvis’ grin (a named coined by my brother as she curls up one side of her lips and bares her teeth) while giving full body wags whenever we return home, or just enter a room after a period of time. But now she was subdued and glassy-eyed. She spent most of her time while she healed sleeping on her bed in my office, while I worked from home. She was on a cocktail of pain medication: rimadyl, gabapentin, and tramadol, which had her feeling grumpy and out of it.  I had to remind myself that she was healing from a very significant procedure, and anyone would be feeling less than their best under the same circumstances.

After those first two weeks, she began to initiate games of fetch with her ball in the backyard, and she would play tug of war with her other two canine siblings. We started out with short daily walks, no longer than 1/2 mile and always monitoring her and respecting her need to stop to rest or turn around if she got too tired. I could see that I was getting my girl back.

We began chemotherapy two weeks after her amputation, to give her body a chance to recover. She received 4 total IV infusions of carboplatin every two weeks and in general tolerated the chemo very well. Typically there would be a day 2-3 days after her treatment where she wouldn’t want to eat or go on a walk, but she’d be back to herself the following day.

As she continued to heal and grew stronger and stronger, I was truly in awe of Stella’s perseverance, tenacity, and spirit. She loves life and she loves her family and she didn’t let loosing a leg slow her down. As the weeks passed, her spirit returned in full and we were back to daily hikes, games of fetch, and her bounding into the kitchen for her breakfast every morning.

Looking back, I can confidently say that we made the right decision to amputate and put her through chemotherapy, but that decision felt like such a leap of faith at the time. 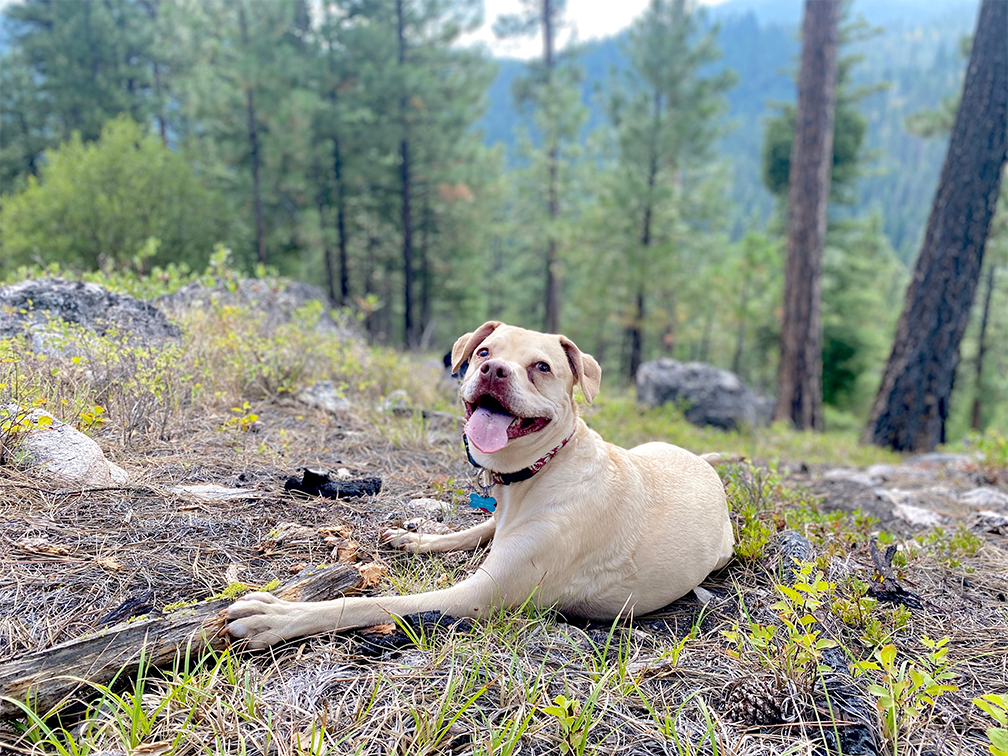 After Stella’s biopsy, I felt my hope grow. I tried not to raise my expectations too high, but I wanted to stay positive. The idea that this whole thing was a mistake was something I wanted so badly to be true.

A week and a half passed. Our vet called at the end of the day on Friday; he had the results.

I felt like I was right back in that initial vet’s office, hearing the news for first time. My immediate thought was that the biopsy was a mistake and we wasted all of this time! We could have had the leg off and already started treatment, but I knew I had made the best decision I could have at the time.

I fought tears as he gave me the options. We could try to get an appointment at WSU for a limb sparing surgery or we could set up an appointment for amputation.

WSU was 5-6 hours away and it was winter. She would need multiple appointments and I was 7 and a half months pregnant. My greatest fear was that something unexpected would happen with the pregnancy (by that time, the baby could come at any moment) and I wouldn’t have the ability to make multiple trips to make sure that Stella got everything she needed.

I made the appointment for the amputation for November 5th.